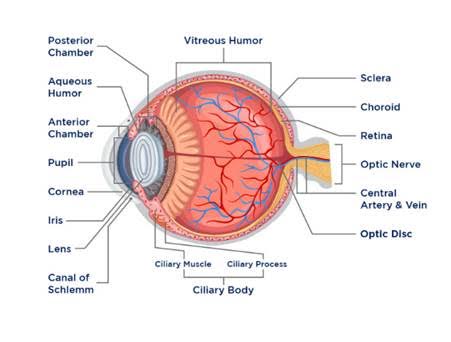 The central region of the retina contains a yellowish spot called the macula lutea. A depression in its center called the fovea centralis is the region of the retina where the light is most precisely focused. At this point the double refraction caused by the cornea and the lens results in a reversed and upside down image. The image will get turned right side up in the brain, which is connected to the eye by the optic disc and the optic nerve. Impulses travel down the optic nerve and into the occipital lobe of the brain, which then interprets the image.

The eye serves as a window through which many valuable clinical observations may be made. Direct observation of the structures of the fundus through an ophthalmoscope may show disease of the eye itself, or may reveal abnormalities indicative of disease elsewhere.