Anatomy of the Eye

Visualize the eye and learn more about its structures. 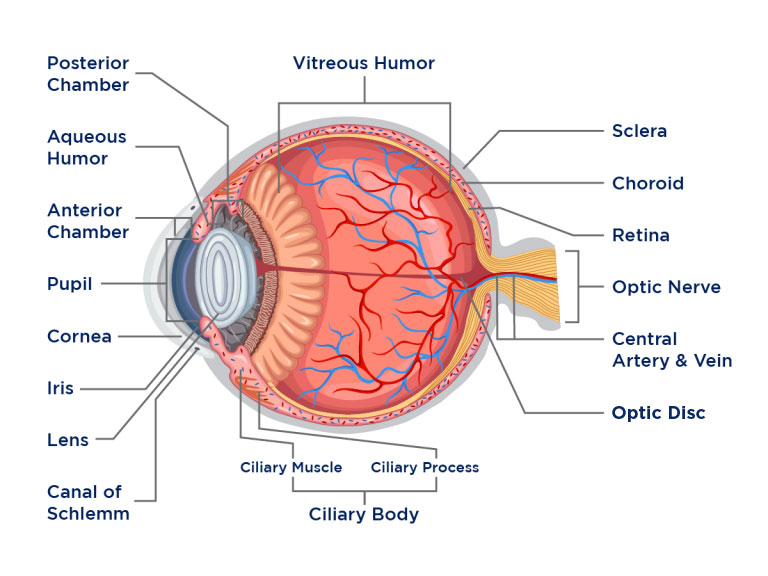 The cornea is a clear, dome-like structure composed largely of connective tissue with a thick layer of epithelium on the surface. The transparency of the cornea is due to the fact that it contains relatively few cells, and no blood vessels. The transparent cornea serves as the window of the eye, and helps focus entering light rays.

Along its circumference, the cornea is continuous with the sclera, the white portion of the eye. This part makes up the posterior 5/6th of the outer tunic and is opaque due to the presence of many large, haphazardly arranged, collagenous, and elastic fibers. The sclera provides protection and serves as an attachment for the extrinsic muscles of the eye.

The choroid coat, in the posterior 5/6th of the globe, is loosely joined to the sclera, and is honeycombed with blood vessels that provide nourishment to surrounding tissues. The choroid also contains numerous pigment-producing melanocytes that give it a brownish-black appearance. The melanin of these cells absorbs excess light and helps keep the inside of the eye dark.

The anterior chamber lies behind the cornea, and is anterior to the iris. The chamber is filled with aqueous humor.

The iris is a thin diaphragm composed largely of connective tissue and smooth muscle fiber that is seen from the outside, as the colored portion of the eye. It extends forward from the periphery of the ciliary body, and lies between the cornea and the lens. The iris divides the space separating these parts, which is called the anterior cavity, into an anterior chamber between the cornea and the iris, and a posterior chamber between the iris and the lens.

The pupil is the circular opening in the center of the iris that regulates the amount of light entering the eye. The size of the pupil changes constantly in response to pupillary reflexes that are triggered by such factors as light intensity, gaze, and variations in emotional response. For example, bright light elicits a reflex, causing the pupil to become constricted in response. Conversely, dim light causes the pupil to become dilated.

The lens is a clear, elastic structure that refracts and focuses light on the retina. The lens is kept under constant tension by the zonules, or suspensory ligaments which, in turn, are attached to the ciliary body. When the circular muscle of the ciliary body contracts, it decreases the circumference of the ciliary body, which reduces the tension on the zonules. This allows the lens to relax to its resting state of greatest thickness, when it is most convex. The light rays can then be focused on the retina, when the eye is looking at something close. This ability of the eye to focus on objects less than 20 feet away is called accommodation. A relaxed ciliary body allows for tightening of the zonules, which thins the lens, making it less convex. This helps the eye to focus on distant objects.

The ciliary body is the thickest part of the middle tunic. It extends forward from the choroid and forms an internal ring around the front of the eye. Within this ciliary body, there are many radiating folds called ciliary processes, and two distinct groups of muscle fibers that constitute the ciliary muscles. These muscles are attached to the zonules, or suspensory ligaments which, in turn, are attached to the margin of the lens capsule.

The inner tunic of the eye consists of the retina, which contains the visual receptor cells, or photoreceptors. This nearly transparent sheet of tissue is continuous with the optic nerve in the back of the eye, and extends forward as the inner lining of the eyeball. It ends just behind the margin of the ciliary body. The retina is the light sensitive part of the eye that contains the photoreceptors called rods and cones. The rods are for peripheral and night vision. The cones are responsible for color perception and central detailed vision.

The macula lutea is a yellowish spot that occupies about one square millimeter in the central region of the retina. It has the highest concentration of cones and is responsible for central, or straight-ahead, vision. The macula has a depression in its center called fovea centralis, which is the focal point of the eye. It’s here that light entering the eye is most precisely focused.

The optic disk is the head of the optic nerve. Here, the nerve fibers from the retina leave the eye and become parts of the optic nerve. The optic disk is the most prominent structure noted when performing an exam with the ophthalmoscope. It varies in color from white to pink. Its normal shape can vary from flat to that of a scooped-out configuration, which is called cupping. The darker vessels emanating from the disk are veins. The lighter ones are arteries.

The optic nerve pierces the sclera in the back of the eye. It consists of the axons of the ganglion cells of the retina, which converge to the optic disk. The optic nerve connects the eye to the occipital lobe of the brain, which interprets the images that the eye sees.

The central vessels of the optic nerve are known as the central retinal artery and vein. They course over the surface of the retina and provide the circulation for its inner half.