Anatomy of the Ear

Otoscopy is all about seeing what’s going on in the ear, nose and throat, and it’s one of the primary methods used for diagnosing patient complaints for the entire ear, nose, throat complex. Here you’ll learn more about the anatomy and function of the ear. 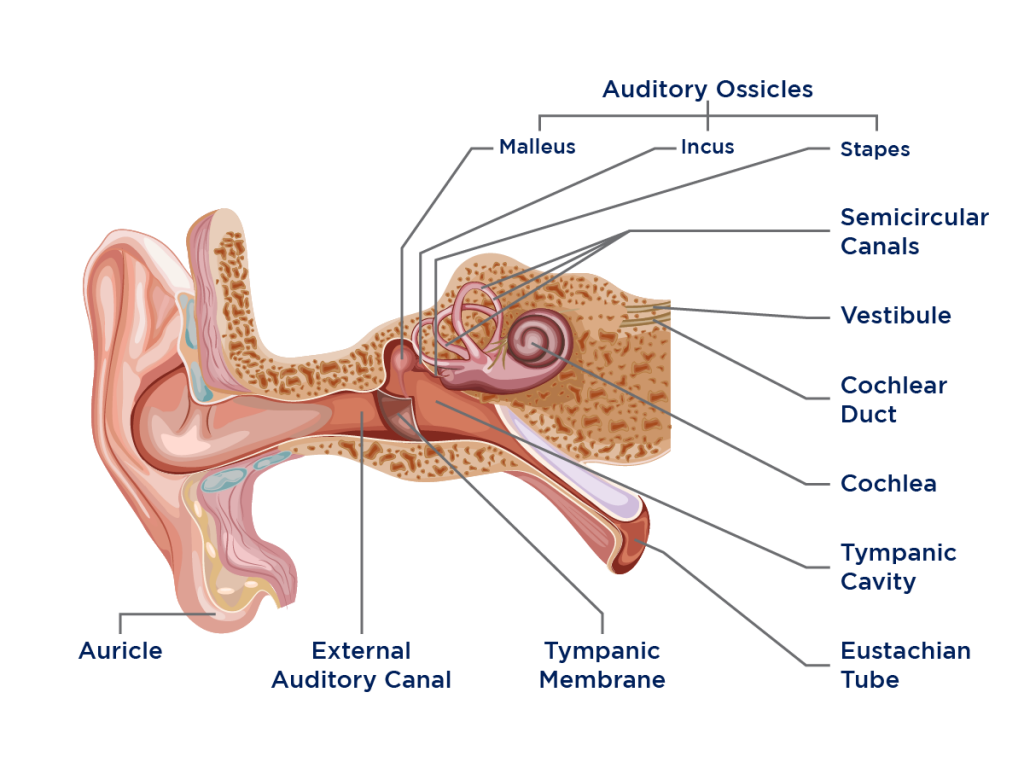 The external auditory canal is a curving tube, about an inch long, carved into the temporal bone of the skull. The opening of the tube is guarded by hairs, and lined with skin that contains numerous modified sweat glands, called ceruminous glands, which secrete wax, or cerumen. The hairs and wax help to keep relatively large objects, insects for instance, from entering the ear.

The tympanic cavity, or middle ear, is an air-filled space in the temporal bone, that separates the external and internal ears. It houses three small bones called the auditory ossicles.

Sound is conducted from the tympanic membrane to the inner ear by way of three small bones called auditory ossicles. They are considered to be the smallest bones in the human body. The malleus, or hammer, is attached to the eardrum. When the eardrum vibrates, the malleus vibrates in unison with it. The malleus causes the incus, or anvil, to vibrate, which passes the movement on to the stapes, or stirrup. The stapes is held by ligaments to an opening in the wall of the tympanic cavity, called the oval window, which separates the middle ear from the inner ear. Vibration of the stapes at the oval window causes motion in a fluid within the inner ear, called perilymph.

The eustachian tube connects the middle ear chamber with the nasal pharynx, or throat. The tube allows air to pass between the tympanic cavity and the outside of the body through the throat and mouth. Normally, the eustachian tube is flattened and closed, but swallowing or yawning can open it briefly to equalize the pressure in the middle ear with the external, or atmospheric pressure.

This is important because the eardrum doesn’t vibrate freely, unless the pressure on both of its surfaces is the same. Many of us have experienced the function of the eustachian tube during rapid altitude changes in airplanes.

The inner ear is a system of maze-like bony chambers, called the bony labyrinth, filled with a fluid called perilymph. The semicircular canals constitute one of the three major subdivisions of the bony labyrinth. These canals contain the dynamic balance, or equilibrium receptors, which respond to changes in angular motion. The three semicircular canals lie at right angles to each other in the three planes of space, so that, no matter which way we move, there will be receptors to detect the movement, and send impulses to the brain, so that we can compensate for changes in position.

The vestibule is the bony chamber between the semicircular canals and the cochlea. It consists of two membranes sacks. Each containing a small patch of hair cells and supporting cells, called a macula, which contains receptors that are essential to our sense of static equilibrium. The maculae respond to the pull of gravity, providing us with information on which way is up or down.

The cochlea is the snail-shaped structure within the inner ear that contains the organ of Corti, which contains receptor cells that convert sound waves to nerve impulses that are transmitted to the brain.

Motion in the endolymphatic fluid in the cochlear duct causes distortion of the hair cells of the organ of Corti, which converts the mechanical force of the fluid waves to electrochemical signals that are sent to the brain, and interpreted as sound.

Step through how the parts of outer, middle and inner ear work together to support hearing and balance.

How the Ear Works